Summary
The personal story of the greatest tragedy in Greenlandic maritime history, told by the grandson of one of the 95 passengers who lost their lives on the cold stormy night of January 30th, 1959, when M/S Hans Hedtoft - on its maiden voyage - allegedly hit an iceberg. This is the only film (of any length) dealing with one of the greatest maritime tragedies of the Kingdom of Denmark.

To mark the 60th anniversary of the tragedy, the shortfilm had its premiere in the town of Qaqortoq, southern Greenland. The M/S Hans Hedtoft set out from Qaqortoq on its final journey in January 1959.

Funding/equipment:
Funded by Nordens Intitut i Grønland and made possible with the help of Nordiska Filmskolan.

Press kit:
To download a high-resolution press kit, click here (PDF).
For more on the director, visit the info page.

More about the film:
Festival-version of the film is available through FilmFreeway.
For a high quality, downloadable screener or a DCP contact me here. 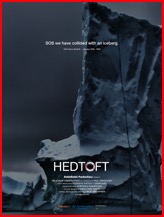